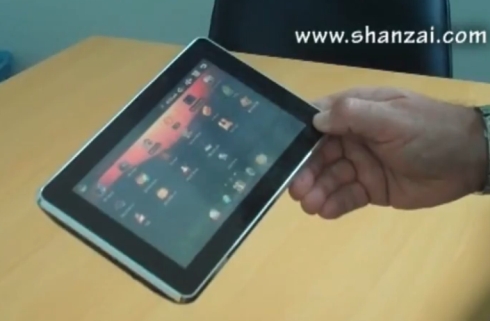 Chinese companies have been pumping out Google Android tablets like nobody’s business for the last few months. But the folks at Shanzai.com snagged some hands-on time with one of the first to feature a fully functional webcam.

There’s nothing that special about an Android device with a webcam. After all, most Android smartphones have cameras. But for some reason, most of the tablets coming out of China have been built without cameras. Maybe the Chinese OEMs are taking their job of copying the Apple iPad a little too seriously.

Anyway, the Firstview 7 inch tablet is available with Google Android or Windwos CE 6.0. It has a 533MHz ARM-based processor, up to 256MB of RAM, and 2Gb of flash storage. It has a 7 inch, 800 x 480 pixel resistive touchscreen display and comes with a stylus that you can store in a slot in the tablet.

The tablet has 802.11b/g WiFi and optional 3G. It comes with a 2100mAh battery and has 2 USB ports, an SD card slot, SIM card slot, and a combination mic/headphone jack.

You can check out a hands-on video courtesy of Shanzai.com after the break.