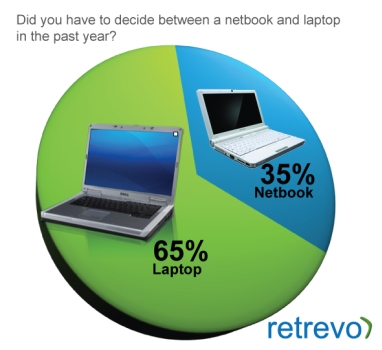 There are a lot of headlines going around today about how the iPad and thin and light laptops are putting the squeeze on netbook sales… and thus that they might be harbingers of doom for the netbooks.

There’s just one problem. Those headlines are tied to a study from Retrovo, which suggests that a significant percentage of people who are considering purchasing a netbook or iPad are leaning toward the iPad — and that those considering a netbook or laptop are leaning toward the laptop. The problem is that the study never claims that netbooks are dying — just that it will be hard for them to keep up the astronomic growth that they experienced in the past year.

And that’s kind of a no-brainer. Did anyone really think that there’d be an 641% increase in netbook sales two years in a row? A large part of the reason sales grew so much last year is because the previous year there were almost no netbooks on the market. 2009 was the first full year that almost every major PC maker had a netbook to sell. Over the past two years many would-be netbook customers have already made their purchases, and it might be a while before they need to buy another netbook.

With new product categories like tablets and thin and light notebooks with ULV (Ultra Low Voltage) processors to choose from, of course some folks would choose those items instead of netbooks.

But that doesn’t mean that netbooks are going to disappear. They still hit a sweet spot of price, performance, and portability. If you want a 10 inch, 2.5 pound machine with a nearly full sized keyboard for under $300, netbooks are still the only game in town.

I particularly get a kick out of Retrovo’s chart explaining that 65% of people deciding between a netbook and a full sized laptop went with a laptop. That’s actually higher than I would have expected, since netbook sales only represent about 20% of portable computer sales at the moment. Also amusing is ZDNet’s claim that netbooks will be relegated to a niche product… because they weren’t already a niche? You know what else is a niche? Computers — which are a niche in the consumer electronics category. I mean, seriously.

I don’t know why everyone squeals with glee every time a study comes out suggesting that netbook sales could be slowing. But I think it’s important to put these things in perspective. No. Netbook sales will not grow as quickly as they did last year. They probably won’t ever do that again. But that doesn’t mean the product category is dead. As I pointed out yesterday, 85 million netbooks have been sold in the past 2.5 years. Compare that with about a million iPads sold in the first month.

10 replies on “Department of obvious research: Netbook sales are slowing”