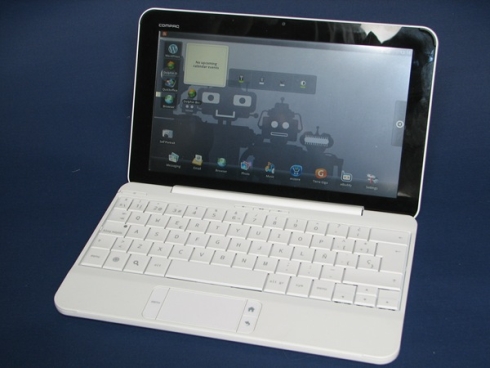 The Compaq Airlife 100 is one of the first so-called smartbooks to make it to market. The 10 inch mini-laptop combines some of the best elements of a netbook with those of a smartphone. Unfortunately, Chippy at Carrypad has determined that the Airlife 100 doesn’t quite live up to its potential.

In a detailed review, he concludes that the 12-hour battery life and always-connected nature of the smartbook are excellent features. But he says the web browser isn’t up to snuff and the lack of access to the Android Market makes installing third party apps a hassle. He’s also less than impressed with the device’s multimedia capabilities.

The Android Market isn’t the only thing that’s missing. The Airlife 100 also ships without the basic Google apps that you get on most smartphones including Gmail, contact sync, maps, and Goggles.

Chippy likes the design of the Airlife 100, which weighs just 2.2 pounds and has a large and quiet keyboard. He’s disappointed that the screen doesn’t open to a wider angle though.

You can find more photos and details at Carrypad.