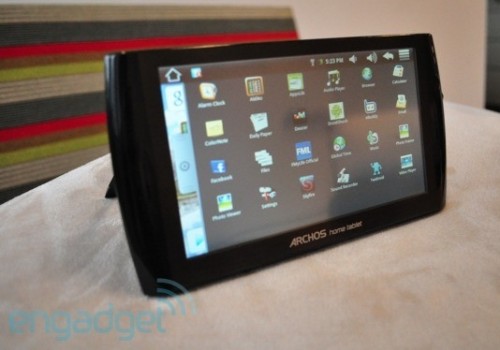 You might think the Archos 7 Home Tablet is nothing more than a slightly larger Archos 5 Internet Tablet… and yo’d almost be right. But Engadget’s Joanna Stern has a detailed review of the new 7 inch tablet running Google’s Android operating system, and she found plenty to like… and plenty to dislike about it.

She likes the tablet’s build quality, even though it’s made mostly of rather cheap plastic. She likes the 7 inch display and overall small size and weigh of the device. She’s not a fan of the resistive touchscren display with narrow viewing angles.

There’s also no accelerometer or software feature for rotating the screen — which is a major step back from the Archos 5 which could easily be used in landscape or portrait mode.

The biggest problem Joanna had was that the Archos 7 runs Google Android 1.5 which means it doesn’t ship with newer Android apps — and it’s tough to download third party apps because the tablet doesn’t come with access to the Android Market. Instead you get access to the AppsLib store which has only about a thousand third party apps — not the tens of thousands of apps available in the Android Market.

The Archos 7 actually has a slower processor than the Archos 5, but Joanna says it didn’t feel all that slow, and the tablet does an excellent job as an audio and video player. When I reviewed the Archos 5, I found that it locked up occasionally and required a reboot, but when I asked her about that, Joanna says she thought the Archos 7 felt pretty stable.

Overall it sounds like the tablet is a mixed bag… but it’s a $199 mixed bag. At that price, it almost doesn’t matter if it’s not the best tablet, media player, or Android device on the market. At least it’s on of the cheapest.