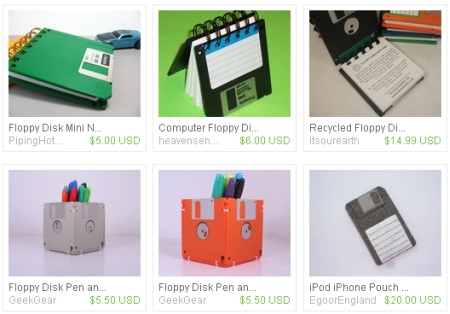 Every now and again I hear someone complain that netbooks typically don’t come with DVD drives. But I’ve never heard anyone complain that they can’t take floppy disks. While we haven’t quite moved to a world without the need for physical storage media, I haven’t even seen a floppy disk in at least 5 years — unless you count floppies that have been repurposed as art, jewelry, and other goods.

But while there’s really only so much you can store on a 1.44MB floppy disk, I was surprised to learn today that Sony was still selling 3.5 inch disks — although the company plans to stop selling the floppies in Japan in March, 2011. Sony introduced the first 3.5 inch floppy disk in 1981, and until recently it was the largest supplier of the floppy disks around the world. But Sony pretty much stamped out worldwide distribution last month.

I don’t think floppy disks are going to become collectors’ items anytime soon. Over the past 30 years, hundreds of millions of the disks have been shipped. But admit it, yo’re kind of going to miss the little guys, aren’t you?

39 replies on “Say goodbye to the 3.5 inch floppy disk (if you haven’t already)”