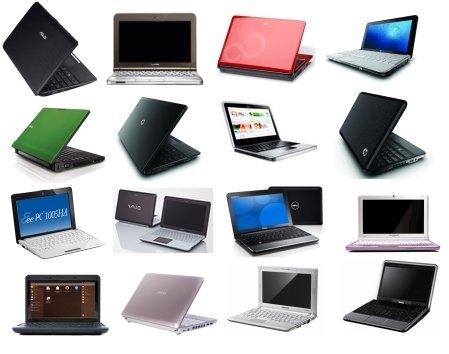 The idea that netbooks represented a brand new category of computing device was always a bit shaky. And I’m not entirely certain that anyone aside from marketers ever believed it. The truth is that a netbook is just a small, cheap, and light weight laptop. That’s it. If you look at all the so-called netbooks released over the last 2-3 years, that’s about all they have in common.

As a side effect, most netbooks have had low power processors, small touchpads, and a slew of other characteristics. And generally in order for people to slap the netbook name on a cheap ultraportable, it has to have a 10 inch or smaller display, although some folks insist that 11 and 12 inch notebooks can also be netbooks if they have a netbook-like processor.

Where am I going with this? Here: As we start to see a growing number of computers that weigh 4 pounds or less and cost $600 or less, it’s hardly surprising that consumers might start picking these devices up as alternatives to 10 inch netbooks with low power Intel Atom processors. Another device might better suit your needs, whether it’s an iPad or a thin and light computer like Asus UL20A. A few years ago you couldn’t find a $500 computer that weighed less than 3.5 pounds. Now you can get a tablet, thin and light, or a netbook.

So I get a bit annoyed when I see stories like the one Business Week is running that claim “Netbook sales sag as the iPad arrives.” There are two problems with that headline. First, although it’s likely that some folks might pick up an iPad instead of a netbook, it’s not really clear that there’s a causal relationship at play — that the launch of the iPad made enough people decide not to buy netbooks to make a dent.

But there’s a much bigger problem here: Netbook sales haven’t sagged. In fact, the article sites statistics from IDC tht show netbook sales in the first quarter of 2010 were up 33.6% from a year earlier.

So what’s with the claim that sales are slumping? Well, it’s because netbook sales aren’t growing as quickly as they had been. In the first quarter of 2009, netbook sales were up 872% from the same period in 2008.

Wow. That makes it sound like things are slowing down considerably, right? Ummm… not really. Not when you consider the fact that there was only one PC maker selling a netbook in the first quarter of 2008. Asus introduced the Eee PC 701 in late 2007 and until the middle of 2008 it was the only netbook model you could buy aside from the OLPC XO Laptop which wasn’t generally available to consumers.

The HP 2133 Mini-Note hit the streets in April, 2008 and other PC makers piled on after that. By early 2009 almost every major computer manufacturer had a netbook on the market. So basically IDC and Business Week are pointing out that netbook sales were dramatically higher at a point when you actually had a choice of models than when you didn’t. Shocking. And a year later, when the market hasn’t changed all that much, sales are still rising by more than 33%. Seems a bit early to declare that sales are off, doesn’t it?

As I said at the outset – I’m not saying netbooks as we know them are necessarily here to stay. It could be that low cost and light weight tablets and larger computers will largely take their place over the next few years. Or maybe smartbooks like the Lenovo Skylight and Compaq Airlife 100, which combine the elements of a smartphone and a netbook will wipe them out.  I’m just saying that as of today, the rumors of netbook’s death have been greatly exaggerated.