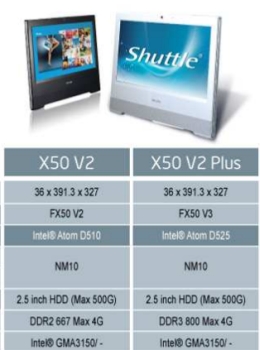 Yesterday we spotted an upcoming version of the Toshiba NB305 netbook with a new Intel Atom N455 processor. The CPU is virtually identical to the Atom N450 powering most netbooks released so far this year, with one exception: It supports DDR3 1066MHz memory. But it looks like the Toshiba NB305 isn’t alone. Lenovo, HP, and Shuttle all have  computers in the works with the new Atom chips.

The folks at nDevil spotted an HP Mini 210 with an Atom N455 processor in Germany.

Netbook Italia says the Lenovo IdeaPad S10-3 will be available in Britain with an Atom N455 processor and a 3G modem.

And Shuttle released specs for a series of new nettops and all-in-one PCs, including the Shuttle X50 V2 Plus which has an Intel Atom D525 dual core processor with support for DDR3 800MHz memory.

As far as I’m aware, Intel hasn’t officially announced the new DDR3-capable chips yet, so there’s no word on when these new machines will hit the streets. But it’s starting to look like it will happen very soon.