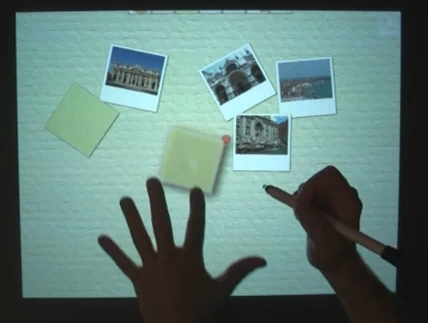 One of the biggest complaints long-time tablet enthusiasts have about the Apple iPad is the lack of stylus input and an active digitizer. In other words, while you can pinch and flick on an iPad you can’t easily write on it, because as soon as you place your palm on the screen you’ll confuse the touchscreen. Besides, writing with a fingertip isn’t as easy as writing with a pen or stylus.

On the other hand, those old school tablet enthusiasts appear to be a vocal minority at this point. The success of the iPhone, iPod touch, and now iPad has effectively guaranteed the dominance of capacitive multitouch displays over resistive displays or touchscreens with active digitizers. All sorts of notebook, tablet, and smartphone manufacturers are using the new multitouch displays.

But that doesn’t mean handwriting recognition and stylus input is necessarily a thing of the past. A Microsoft Research project called Manual Deskterity shows a way that the two might be able to live hand in hand. Or rather, finger and stylus.

The idea is that a touchscreen could be rigged up to recognize two different types of inputs – the electrical impulses from your fingertips and a special pen input. the result is that you would be able to place your palm on the screen and write with the stylus without any interference. But you could use your fingers to manipulate content by pinching, flicking, or performing other multitouch gestures.

Things get really interesting when you consider new actions you can perform by using both types of input simultaneously. In the demo video below, the developers show a ton of actions, such as using finger and stylus to cut or copy pictures, “staple” them together by selecting with a finger and tapping with the stylus, or using an “exacto knife”-like feature by holding a photo with one finger and tracing a portion of it with the stylus.

I have to say, the UI is kind of fascinating — but it’s also not entirely intuitive. Part of what makes Apple’s multitouch gestures work is that they’re generally intuitive. But some of the actions shown in the Deskterity video aren’t. For instance, some actions require holding an image with one finger and then using the stylus — but other actions require placing two fingers on the image. There’s no intuitive way to figure out which is which… so you just have to memorize the different things you can do with the pen and stylus.