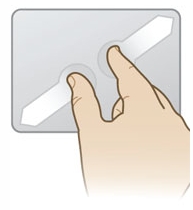 Synaptics has introduced technology to support multitouch touchpads on systems running Linux. Up until now, Synaptics drivers were available primarily for Windows systems with supported touchpads. But the Synaptics Gesture Suite Linux (SGS-L) is available for a variety of Linux distributions including Fedora, Millos Linpus, Red Flag, SUSE, Ubuntu, and Xandros. Synaptics says Google Chrome OS and other operating systems built on Linux should also be supported.

The gesture suite includes multitouch gestures including pinching to zoom, twisting to rotate, and using two fingers to scroll.

This doesn’t mean you can simply download the SGS-L and install it on your notebook though. At least not yet. Synaptics is making the software available for free to OEM and ODM partners that purchase Synaptics TouchPads and ClickPads for use in their computers and other products. The idea is that consumers will be able to purchase notebooks that ship with Linux which already have multitouch gesture support out of the box.

I doubt it will take too long before we start to see Linux distributions start to incorporate the technology though. If that happens, you might be able to purchase a notebook with Windows, install a Linux distribution such as Fedora or Ubuntu yourself, and find that it supports multitouch out of the box. But I don’t think we’re there quite yet.