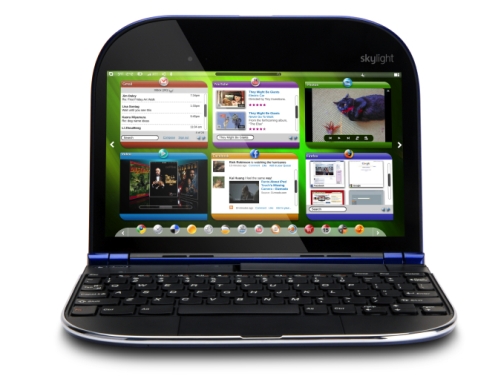 When Lenovo introduced the Skylight smartbook in January, the company said it would come to market in April. But Laptop Magazine is reporting today that it won’t be available in the US market until July.

At first glance, the Skylight looks like an oddly shaped netbook with a large keyboard, enormous touchpad, and super-slim design. Instead of a traditional hard drive or solid state disk, it uses a removable USB flash drive for storage and runs a custom Linux operating system called Skylight that’s designed to make the smartbook feel more like a smartphone and less like a PC.

Under the hood, the Skylight has a 1GHz Qualcomm Snapdragon processor with integrated GPS, WiFi, and 3G connectivity. It’s basically the same chip found in the Google Nexus One Smartphone.

AT&T will offer the Lenovo Skylight in the US and the wireless provider will offer customers a 3G data plan to go with the smartbook.

Although the US launch is being pushed back 2-3 months, Laptop Magazine says the Skylight will be available in China in May and in “other markets” in June.Hopefully the delay means that Lenovo will have time to work out some of the kinks before launch. For instance, when I first got a chance to play with the Skylight, Flash video playback was pretty awful.

You can check out my hands-on video with the Lenovo Skylight from CES after the break.