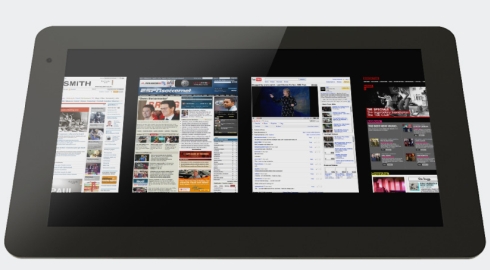 The JooJoo tablet is now available for purchase in Europe, where you can pick one up for €359 plus €15 for shipping. That’s actually not a bad deal, as it comes to a few bucks less than the $499 plus shipping you’d have to pay to get the tablet in the US or Canada.

But while the price for this 12 inch web tablet might be halfway decent, there’s still a pretty good chance you don’t want one. Earlier reviewers were left horribly unimpressed. And there seems to be evidence that as few as 64 tablets have been sold to date — which kind of makes you wonder whether the company will still be around in the years (or months) to come and whether there will be any support for this product.

The JooJoo features a 12.1 inch, 1366 x 768 pixel display, a 1.6GHz Intel Atom N270 processor, NVIDIA ION graphics, and a custom Linux operating system that basically offers a web browser an on-screen keyboard and nothing else.

The tablet started out as the CrunchPad, a partnership between Fusion Garage and TechCrunch’s Michael Arrington. His idea was to build a $200 tablet for surfing the web. That never quite happened.

Update: According to the Fusion Garage blog, we can also expect to see a software update soon which should address some of the issues in early version. Among other things, it should add support for full screen HD video playback.

8 replies on “JooJoo tablet up for order in Europe”