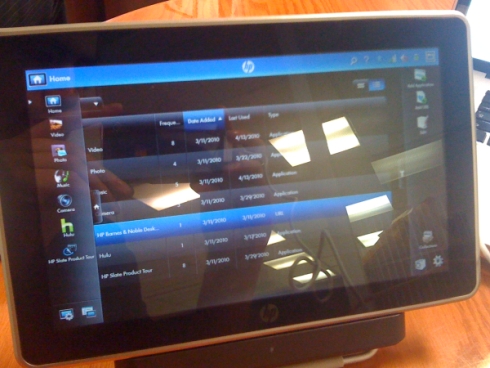 HP is working on a slate PC with an 8.9 inch, 1024 x 600 pixel display and a 1.6GHz Intel Atom Z530 processor. We’ve known that much for ages. What we haven’t really known is how the Windows 7 tablet will stack up against the competition, because all we’ve seen to date is the information HP wants us to see. But the folks at Conecti.ca got their hands on a real, pre-production model and the verdict is… that it’s alright, but nothing too special.

I have to say, I’m disappointed but not surprised. I’ve spent some time with a number of convertible tablets with Intel Atom processors and various versions of Windows, and they tend to suffer from a couple of problems. The operating system just isn’t that easy to navigate using touch-only controls — even with Windows 7 Home Premium’s advanced multitouch gesture support. And they tend to feel sluggish when performing some tasks, such as auto-rotating the display. I suspect this is at least partially due to the low power processor.

HP tries to deal with at least the software problem by bundling the HP Slate with a custom touch-friendly user interface that you can use to launch programs and perform other tasks without looking at the default Windows 7 user interface. The tablet also has a Broadcom Crystal HD video accelerator to help with high definition video playback. But Conecti.ca reports that the 1GB of RAM isn’t upgradeable,  which means there’ s no easy way to boost performance.

Unlike the Apple iPad, the HP Slate can run pretty much anything you can run on Window 7 — including Adobe Flash. But as Conecti.ca points out, that also means it takes a minute or so to boot the operating system (although you can probably deal with that by putting the computer to sleep instead of shutting it down when you’re not using it).

Still, if you’re looking for an alternative to the iPad that has expansion ports, a built in camera, HD video playback and an HDMI output, the HP Slate is sitll likely to be your best bet.