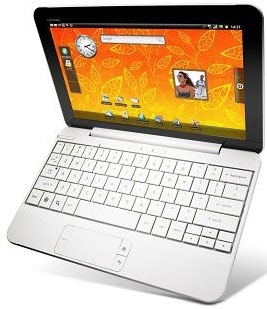 So here’s what we know. The smartbook will have a 1GHz Qualcomm Snapdragon QSD8250 processor, 512MB of RAm and 512MB of Flash memory, plus 16GB of solid state storage. It will have a 10.1 inch, 1024 x 600 pixel display. What’s interesting is that it will feature 16-bit color rather than 24-bit. If that doesn’t sound like a huge difference, 16-bit color basically means the display can handle 65 thousand colors, while 24-bit color depth supports 16 million colors.

The display is a backlit TFT display with a resistive touchscreen. That means you’ll be able to use a stylus or the back of your fingernail, but probably not your fingertip. And while the spec sheet doesn’t say anything about multitouch, most resistive displays can only handle single touch input.

The Compaq Airlife 100 will have a 28Whr battery. Since the smartbook uses a low power ARM-based processor, that should be enough to provide decent run time, but I’m not even going to hazard a guess as to exactly how much battery life you’ll get.

As for software, the smartbook will ship with Google Android. HP is also highlighting support for POP3 and IMAP email, calendar and contacts, alarm clock, calculator, and camcorder app. Those all pretty much come with Android. But it looks like there will be some interesting additions, including QuickOffice for working with Microsoft Office documents, RoadSync Exchange for synchronizing your calendar, contact, and email data, and Adobe Flash Lite for the web browser — which seems strange, since Adobe is expected to release Flash Player 10.1 for Android soon, but I’ve heard nothing about Flash Lite for Android. I think this might be a mistake.

There’s still no word on a price or launch date, but since the Airlife 100 will support both WiFi and 3G wireless connectivity, I suspect we may see the smartbook offered at subsidized prices in partnership with a wireless carrier such as AT&T soon. You may also be able to pick up an unsubsidized version directly from HP, but we won’t know for sure until someone slaps a price tag and launch date on this product.

via My HP Mini

18 replies on “HP reveals the specs for its first smartbook”