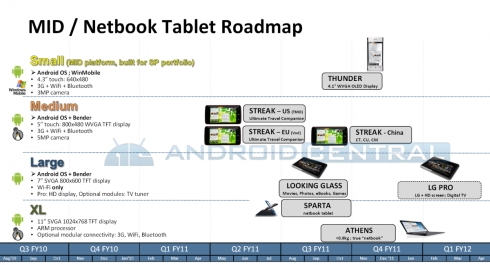 Dell isn’t doing such a great job of keeping their product road maps confidential these days. A few days ago we learned about a new 7 inch tablet called the Looking Glass with an NVIDIA Tegra chip. Engadget published details for three unannounced Dell smartphones. And now Android Central has uncovered a product road map with details for several new machines including a netbook tablet and an ARM based netbook, both due out in 2011.

The convertible netbook tablet is code-named Sparta, while the netbook is called Athens. Both will apparently feature ARM-based processors and 11 inch, TFT displays. They’ll be capable of running Google Android or Moblin Linux, and they’ll be available with optional 3G, WiFi, and Bluetooth.

Aside from that, the only thing we know is that they’ll apparently have 1024 x 768 pixel displays and that the notebook will weigh less than 2 pounds. While we’ve gotten rather accustomed to netbooks with 1024 x 600 pixel screens over the past few years, Apple was onto something when the company decided to go with a 1024 x 768 pixel screen for the iPad. Because when you turn it sideways, you have a 768 x 1024 pixel screen — which is good enough for viewing most web pages. That’s not something you can easily say about a 600 x 1024 pixel screen.

Of course, another solution is to stick with the widescreen format, but use an even higher resolution 1366 x 768 pixel display. But pixels don’t grow on trees, and the goal with most of these products is to keep costs down.

You can find a higher quality version of the leaked product road map at Android Central.

10 replies on “Dell may be working on convertible netbook tablet, ARM-based netbook”