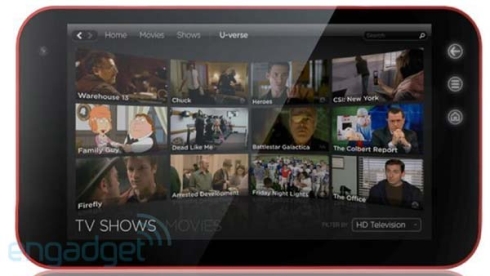 The upcoming Dell Streak 5 tablet is already a pretty droolworthy gadget, combining some of the best features of a Google Android smartphone with the larger display of a portable media player. But the folks at Engadget got their hands on some leaked information about an even more impressive tablet from Dell that should be available in November.

The Dell Looking Glass will reportedly feature a 7 inch 800 x 480 pixel display and the latest NVIDIA Tegra chipset which combines a low power ARM-based CPU with NVIDIA’s graphics solution for enabling HD video playback and 3D graphics. The tablet will ship with Android 2.1, which is the latest version of Android — although it might not be by the time the Looking Glass is released later this year.

Dell will also reportedly offer the tablet with an optional ATSC or DVB-T tuner for picking up high definition over-the-air video broadcasts.

The tablet will ship with 4GB of RAM, 4GB of flash storage, and an SDHC card slot for additional storage space. It has a 1.3MP webcam. It will have an HSPA 3G modem which means mobile broadband customers will be able to get online even when they’re not near a WiFi hot spot, although the Looking Glass also supports 802.11b/g/n WiFi and Bluetooth 3.0 connections.

It’s not clear whether you’ll be able to make phone calls on the Looking Glass, a feature the Dell Streak 5 will reportedly have. But it looks like this tablet is targeted more squarely at iPad buyers than iPhone customers.