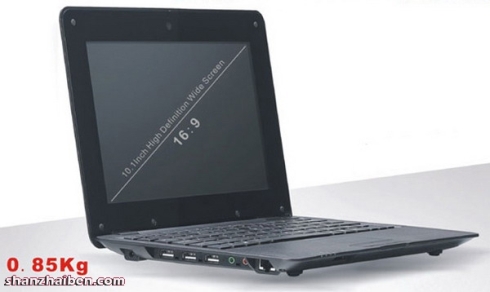 The Wabook ARM-based mini-laptop isn’t the first $100 netbook to hit the streets in China. But it’s one of the best looking I’v eseen. Typically these dirt cheap models have 7 inch displays and incredibly cramped keyboards. But the Wabook netbook has a roomy 10 inch, 1024 x 600 pixel display making it look like virtually every other netbook released in the last two years.

On the other hand, there’s a reason it’s cheap. It doesn’t have an Intel Atom processor and it doesn’t run Windows.

Instead, the mini-notebook has a 300MHz ARM-based VIA 8505 chip, 128MB of RAM, and 1GB of flash storage. It runs Windows CE or Google Android and has an 1800mAh battery which is only good for about 2 hours of run time. On the bright side, the machine weighs less than 1.9 pounds. Oh yeah, and it sells for about $100 in China.