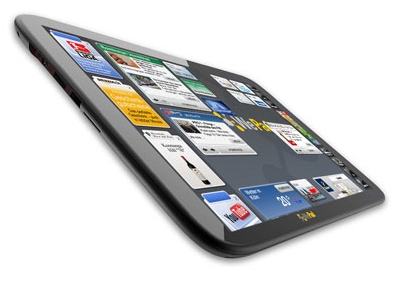 Sure, the iPad is the tablet of the moment. But it’s hardly the only touchscreen tablet coming out in the near future. One of the more interesting models I’ve seen is the WePad, an 11.6 inch tablet from German company Neofonie. But while the Apple iPad is in the hands of reviewers and ready to ship this weekend, the WePad is a bit… further behind.

According to German site Haz, there are only two prototypes at the moment — and they have cases that are made out of wood, although the finished product will have a magnesium-aluminum case.The demo unit has a resistive touchscreen display while the final version will have a capacitive multitouch display. And there’s no

Unfortunately the company still isn’t showing off a working prototype on video, but we do now know that the WePad’s Linux user interface was developed by a company called 4tiitoo (pronounced, forty-two), which is accepting applications for a beta testing program.

If you happen to speak German, you can also hit up the Haz web site for a video interview with the CEO of Neofonie. He says the tablet should be available this summer.