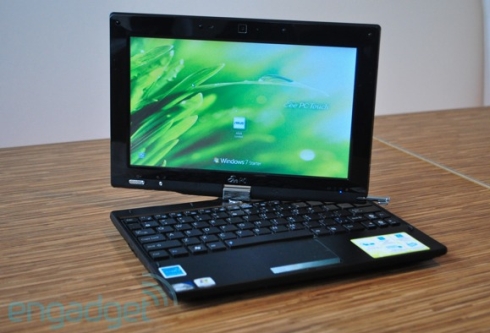 Engadget has published a detailed review of the Asus Eee PC T101MT convertible touchscreen style netbook which recently started shipping in the the US. And overall, Engadget’s Joanna Stern seems to think the machine works pretty well — as a netbook. Unfortunately, the T101MT’s defining feature is the fact that it’s not just a netbook, it can also be used as a tablet. And when you fold the screen down and try to use the computer in tablet mode, you’re in for a rather unpleasant experience.

First, it has a resistive multitouch display instead of a capacitive screen. That means you can easily interact with the screen with the included stylus or by pressing your fingers on the screen rather hard.

But the bigger problem is that the computer ships with Windows 7 Starter Edition, which doesn’t support multitouch gestures, doesn’t automatically bring up an on-screen keyboard when you tap on a text box, and doesn’t support flick gestures (such as navigating through web sites in Internet Explorer by tapping and dragging on the web page instead of the scrollbars).

Asus does bundle a third party on-screen keyboard, but you need to bring it up manually every time you want to enter text. And you’re going to end up tapping at the keyboard with a stylus instead of your fingers since the resistive display isn’t that responsive to fingertips and the operating system doesn’t recognize multitouch.

Asus does offer the Eee PC T101MT with Windows 7 Home Premium in other countries, but has no plans to offer that option in the US. Of course,  you can upgrade from Windows 7 Starter yourself for about $50. But even if you do that, there are some issues. There’s no accelerometer, which means the display won’t auto-rotate when you change from landscape to portrait mode. You have to press a button to manually rotate the screen – which Joanna says takes about 5 seconds.

All in all, if the Eee PC T101MT sold for under $400, I suppose you could say it was just another netbook with the added bonus of a touchscreen that you could use if you really wanted it. But at $499, the T101MT is a premium device (for a netbook, anyway), and you kind of expect it to work better as a tablet, since the touchscreen interface is its main selling point.

Unfortunately, the problem isn’t just with the Asus tablet. As I pointed out in my CTL Convertible Classmate PC2 review, I’m just not sure that it makes sense to build a touchscreen tablet with the same specs as a typical netbook (Windows 7, Intel Atom CPU, and 1024 x 600 pixel display). I’ll have a review of the Lenovo Ideapad S10-3t later this week, and by way of preview, I can tell you right now that it’s not without some issues as well.

10 replies on “Asus Eee PC T101MT reviewed: Decent as a netbook, awful as a tablet”