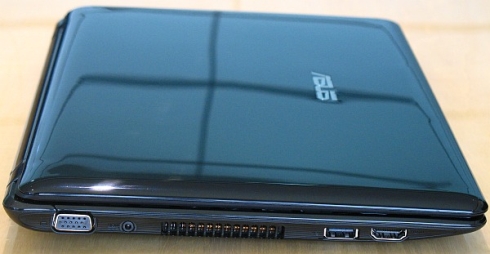 The Asus Eee PC 1201NL is basically a cheaper version of the Eee PC 1201N. While both models have 12.1 inch, 1366 x 768 pixel displays and NVIDIA ION graphics, the 1201N has a dual core Atom 330 processor and ships with Windows 7 Home Premium, while the 1201NL has a single core Atom N270 CPU and Windows XP. It’s also expected to be generally cheaper. On the other hand, there’s very little setting this notebook apart from other ION-based laptops such as the Lenovo IdeaPad S12, Samsung N510, and HP Mini 311.

The folks at TechTree in India got their hands on a pre-release Eee PC 1201NL, and they seem reasonably impressed with the machine — especially compared to the budget Eee PC 1201T which has an AMD processor, ATI graphcis, and ships without any operating system at all.

TechTree reports that the Eee PC 1201NL has a brighter screen than the 1201T and gets better battery life — which is a relative term, since the 1201NL still topped out at just 3.5 hours of run time. It also handles HD video playback more smoothly thanks to the bundled ArcSoft media player which works with the NVIDIA ION graphics to enable 1080p HD video playback.

The reviewer does point out that the Eee PC 1201NL actually ships with NVIDIA ION LE graphcis instead of full ION graphics. That means there’s no out of the box support for DirectX 10. But if you’re adventurous, you can hack the graphics driver to support DirectX 10.