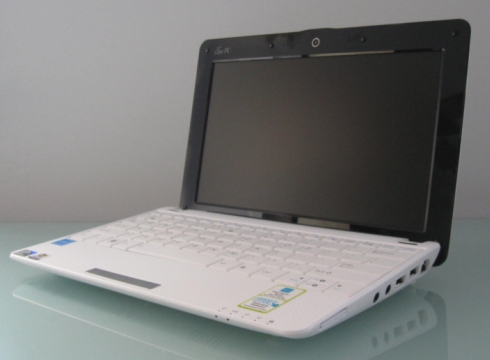 But thee Eee PC 1001P also has a few things going for it. First, it’s cheap, with a starting price of under $300. And second, it has a matte display and lid, which means it won’t attract fingerprints as easily as some models, and it’s much easier to use in direct sunlight than a netbook with a glossy screen.

The Asus Eee PC 1001P has the same Seashell-inspired design as the last few netbooks from Asus including the Eee PC 1005PE. That means it’s wider near the back where the battery is, and thinner in the front, with rounded edges and corners. But while the overall case design is much the same as Asus netbooks past, there are a few subtle differences between the Eee PC 1001P and earlier models. 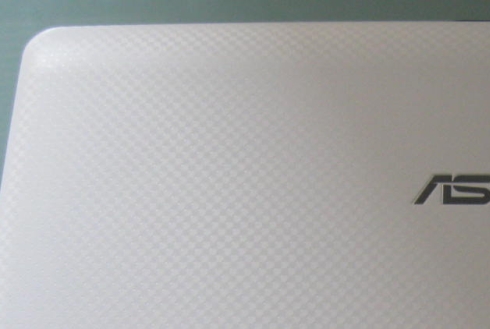 First, Asus has replaced the usual glossy lid with a matte finish with a textured pattern. Depending on what angle you’re at, the lid looks a bit like a subtle checkerboard or a series of dots. But the important thing to note here is that it won’t show smudges and fingerprints as easily as most other Eee PC netbook lids.

The textured pattern also covers the palm rest area of the netbook, while the battery, bottom, and areas around the sides of the keyboard are just plain matte plastic. 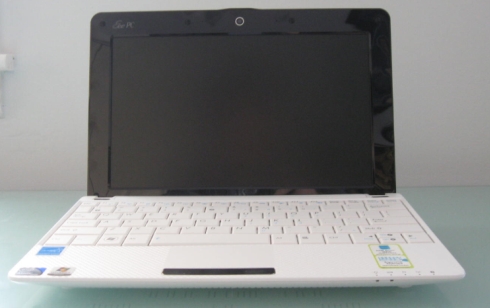 Asus has also dropped the glossy display on this model in favor of a matte finish. Not only does this mean the display doesn’t show smudges as easily, but it also mean that the screen is much easier to read in direct sunlight than it would be if it were a glossy display. That’s because it doesn’t reflect glare. You can use most netbooks with glossy displays as mirrors when you cut the power and gaze into the blank screen. That’s not the case with the Eee PC 1001P thanks to the matte display.

The matte display also makes the netbook easier to use outdoors. The matte display doesn’t look as good as a Pixel Qi screen outdoors. But on a cloudy day you could probably sit outside with this netbook and get a little bit of work done without the screen serving double duty as a mirror. 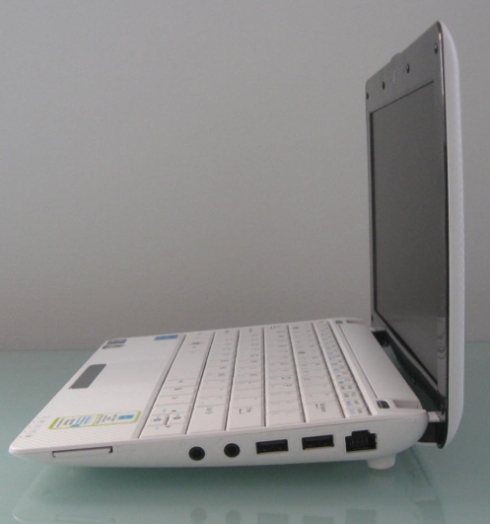 Despite the fact that the netbook has a matte lid and a matte screen, Asus stuck with shiny black plastic for the bezel. So if you miss being able to see your reflection in a netbook display, all you have to do is glance at the area around the screen. 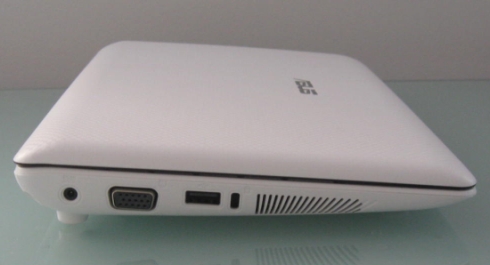 Around the sides of the Eee PC 1001P you’ll find a VGA port, 3 USB ports, mic and headphone jacks, an Ethernet jack and an SDHC card slot. 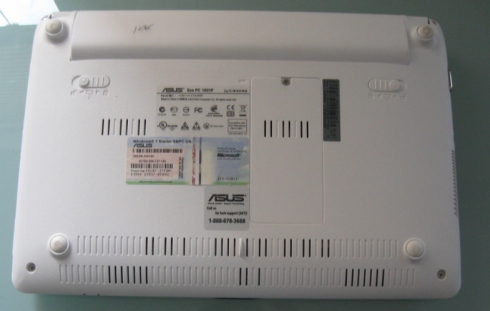 The bottom of the computer has a single access panel which you can remove to get at the single memory slot. Replacing the hard drive or other components requires opening up the computer’s chassis.

The Asus Eee PC 1001P has the exact same keyboard as the Eee PC 1008HA which I reviewed late last year. It’s not quite the same chiclet-style keyboard found on other netbooks, but the keys are large and flat and offer a decent amount of surface area, making typing comfortable. 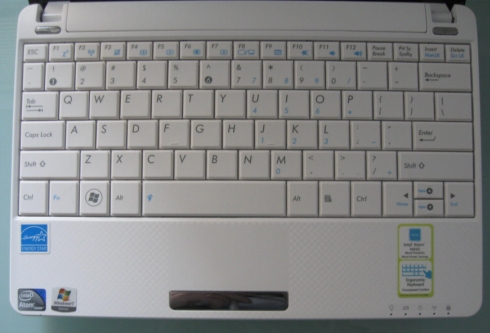 My only real complaint with the keyboard is that the arrow keys are awkwardly crammed into the lower right corner so that you have full size left and right arrow keys and tiny up and down arrow keys sandwiched between them. That’s four keys crammed into a space barely large enough for three normal keys — although the problem is really just that the Up/Down buttons are too small. I have no problem with the left and right arrows which double up as Home and End keys. 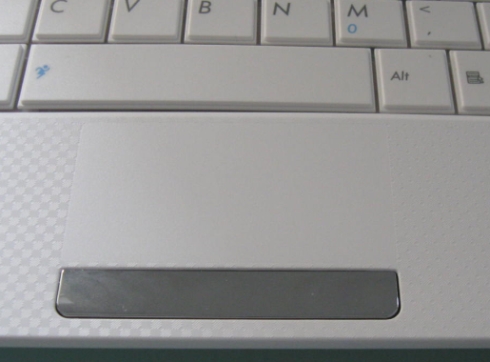 While the touchpads on most Eee PC Seashell-style netbooks feature bumpy, textured surfaces, the touchpad on the Eee PC 1001 has a flat surface. I wouldn’t describe it as smooth plastic, since you can detect a bit of a texture as you draw your finger across the surface, but it’s definitely a far cry from the dimples and bumps found on other recent Asus netbooks.

The texture of the touchpad is different than that of the palm rest area surrounding it. That means that it’s easy to detect the edges of the touch area with your finger without looking down. It also gives the palm rest/touchpad are a funny, somewhat inconsistent look.

Below the touchpad there’s a single mouse button which can register both right and left clicks depending on which side you press.

There doesn’t tend to be a lot of variation in the performance of 10 inch netbooks with 1.66GHz Intel Atom N450 Pine Trail processors. The Eee PC 1001P notched almost identical scores in my benchmarks to the Dell Inspiron Mini 10, Samsung N210, and Asus Eee PC 1005PE. These tests involved transcoding audio and video files, zipping a large folder of files, and copying the same folder.

That is to say, the Eee PC 1001P is capable of performing all of these tests, but I wouldn’t really recommend using any netbook as your primary machine if you plan to spend a lot of time on CPU-intensive tasks such as editing or transcoding video files. A notebook with an Intel CULV processor can do the same transcoding job in half the time.

That said, the netbook was reasonably responsive when I used it to surf the web with multiple browser tabs open and a few other apps running in the background. Overall, the performance is comparable to what you’d get from the pricier Asus Eee PC 1005PE. You just don’t get a few bells such as the optional 63Whr battery and the faster 802.11n WiFi. 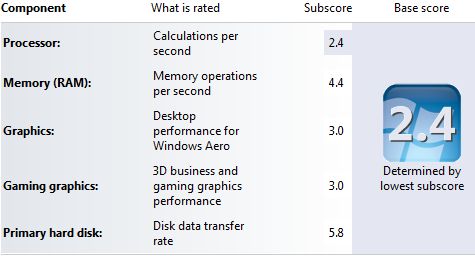 Windows 7 gives the Eee PC 1001P a 2.4 in the Windows Experience Index, with the CPU snagging the lowest score and the highest score going to the hard drive — which is about par for the course for most netbooks.

The Eee PC 1001P-PU17 comes with a 6 cell, 4400mAh, 48Whr battery. It sits almost flush with the base of the laptop, but it does provide a little extra bump in the back of the notebook which is why the Eee PC 1001P is thicker in the back than the front.

But it’s not the aesthetics that you care about so much as the performance. Asus describes this an 11 hour battery, and many retailers tack that battery life claim onto the product description.  While I didn’t get anywhere near 11 hours of run time, I did get a respectable 8 hours and 23 minutes of battery life while surfing the web with the backlight at its medium setting. 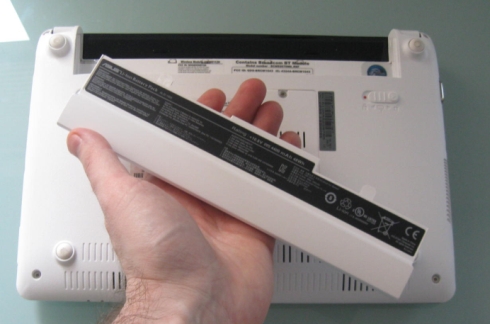 I suppose if you turned off the wireless and dimmed the screen all the way, you might be able to get closer to 10 hours. But to be honest, once you pass the 8 hour mark, you’ve got a computer that’s pretty much good for a whole day the office. Just don’t expect to use this netbook watch movies non-stop for 10 hours on an international flight unless you pack a spare battery.

There are good reasons the Asus Eee PC 1001P is cheaper than the Eee PC 1005PE. The battery life isn’t as good and it doesn’t have 802.11n WiFi. But honestly. That’s about it. If those features don’t matter to you, the Eee PC 1001P is a very good netbook for the money. And if you prefer matte displays over glossy, then the decision between these two models is almost a no brainer. 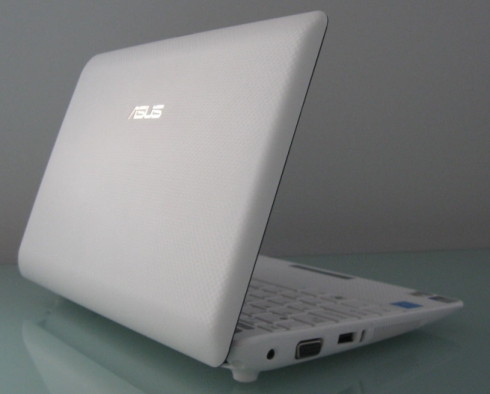 Unfortunately while the textured pattern looks fine on the lid, it looks a little silly on the palm rest area, especially with the plain white touchpad stuck in the middle. And I’m a bit baffled by the decision to pair a glossy bezel with a matte display.
under
In a perfect world, you would be able to pick and choose the features you wanted and select a matte display with a plain, non-textured matte lid and a 63Whr, 10+ hour battery. But that’s not an option at the moment. 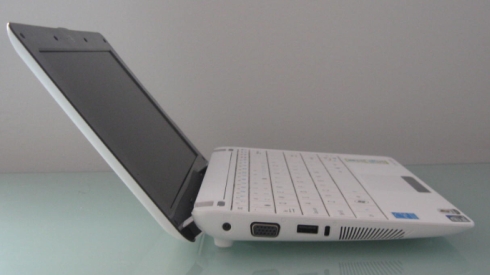 and ships with a smaller hard drive and without Bluetooth.