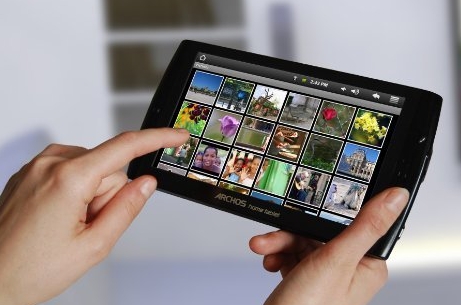 While dozens of companies have announced plans to bring tablets running Google’s Android operating system to market sometime this year, Archos is one of the few that has actually been selling Android tablets since last year. But if the Archos 5 Internet Tablet with its small 5 inch display isn’t your cup of tea, it looks like you’ll have a new choice soon. Archos introduced the Archos 7 and 8 Home Tablets last month, and now the Archos 7 is avialable for pre-order from Amazon for $199.99

The Archos 7 Home Tablet has a 7 inch, 800 x 480 pixel display, a 600MHz ARM-based processor, and enough graphics pow to handle 720p HD video playback. The Archos 7 is supposed to come with between 2GB and 8GB of flash storage space, but the model up for pre-order from Amazon has 8GB. The 2GB model will presumably be a bit cheaper if and when it hits the streets.