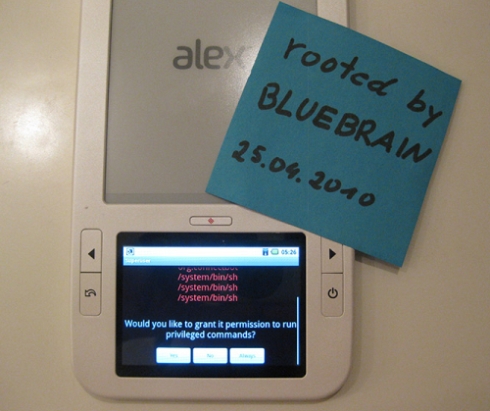 At first glance, the Spring Design Alex eBook Reader looks an awful lot like the Barnes & Noble Nook. Like the Nook it has an e-Ink display for reading books and a color display for browsing your library and performing other tasks. And like the Nook, the Alex is powered by Google’s Android operating system, which theoretically means it can run third party apps — if any were readily available for the platform.

Now it looks like the similarities might go a bit further. The other day I pointed out that the Nook was moving a bit closer to the tablet PC space thanks to the addition of a web browser and some new apps (Soduku and Chess). But the Alex might have just leapfrogged over the Nook in the ability-to-function-like-a-computer department. Because one intrepid hacker figured out how to root the Android operating system on the Alex.

Rooting an Android device is basically the same as jailbreaking an iPhone. It gives you root access to the operating system, meaning you can access settings that would normally be closed off and run unofficial code.

I’m not sure how useful this achievement will be… even if you get to the point where you can install third party apps from the Android Market, it’s not clear how well they’ll run on this unusual device — and it’s a safe bet that most won’t take advantage of the e-Ink display. But perhaps we’ll start to see some custom apps designed for hacked versions of the eBook reader in the not-too-distant future?