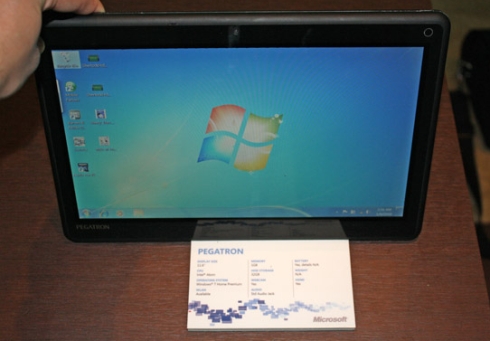 So you know that WePad tablet all the kids are going crazy for? The one with the 11.6 inch display and the name that makes it sound like it’s so much cooler than an iPad that it uses the first person plural instead of singular? It looks like it may be based on a slate PC design that Pegatron was showing off at CES earlier this year.

The Pegatron prototype had the same 11.6 inch, 1366 x 768 pixel display and 1.66GHz Intel Atom N450 processor. But while it looks like the WePad is going to run Google Android, the Pegatron demo machine had Windows 7 installed. Since the computer has an x86 processor, it can run either operating system (or OS X, for that matter).

The folks at Neowin shot a brief hands-on video with the tablet at CES, as did the Notebook Italia team. You can check out both videos after the break.

The touchscreen seems reasonably responsive and the computer is rather thin, even if it is a it larger than the Apple iPad. But the iPad has a 9.7 inch, 1024 x 768 pixel display, while the WePad/Pegatron tablet has a larger, higher resolution display.

2 replies on “WePad video demo from CES… sort of”