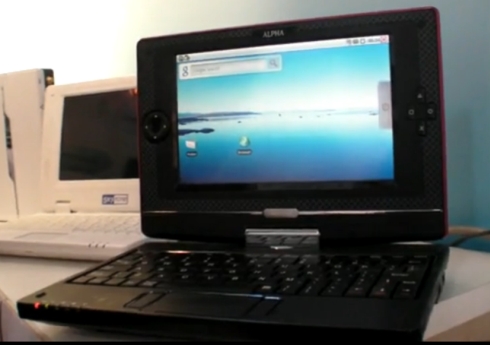 The Skytone Alpha 400 was one of the dirt cheap mini-laptops with an Xburst processor and a choice of Linux or Windows CE. We’ve seen dozens, if not hundreds of these little guys with Xburst or ARM-based CPUs over the past few years. But Charbax from ArmDevices spotted one of the most intriguing models I’ve seen to date at CeBIT.

The new Skytone Alpha from MAG Digital has an ARM11 processor and runs Google Android 1.6. It has a 7 inch, 800 x 480 pixel display. But the cool part is that there’s a swivel that lets you rotate the screen 180 degrees and fold it down over the keyboard. So you can use the computer as a tablet or a laptop.

The device has WiFi, 2 USB ports, an SD card slot, mic and headphone jacks, and a TV output (although I didn’t recognize the connector, so I can’t say what kind of video out you get).

The battery is only good for about two hours, and the touchpad is rather tiny and features buttons on the left and right sides. What’s a bit unusual is that unlike other Android computes I’ve seen, the touchpad isn’t just good for scrolling through Android menus — there’s actually a cursor that shows up on screen.

On the sides of the touchscreen display, there’s also a directional pad and four buttons that you can use for playing games.

There’s no word on the final pricing, since Skytone is the OEM, not the end distributor. Theoretically it could sell for $200 to $250, but it has to come to market first.

You can check out charbax’s hands-on video after the break.