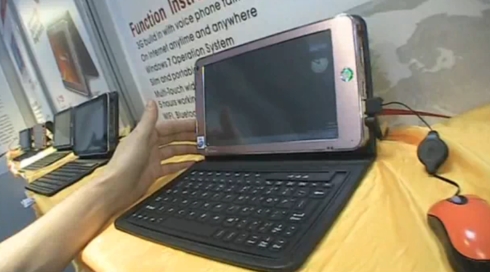 Long before there was an Intel Atom processor for low power mini-laptops and tablets, there was the VIA C7-M. This processor has fallen out of favor in recent years, and it’s not quite as fast as the Atom chipset. But it is an x86-based chip, which means you can run Windows, Linux, or pretty much any other operating system on a computer with a VIA C7-M chip. And some PC makers are still building systems using this chipset.

Jkkmobile stumbled across the booth for a Hong Kong based company called Pierre Cardin (no relation as far as I can tell), where several 5, 7, and 9 inch tablets with were on display. They all had VIA C7-M chips, and some of the newer models had a nifty cover with a built in keyboard. You could close the case over the tablet and throw it in your bag. Or open it up and use the tablet like a laptop.

That’s probably the most exciting feature. But as far as cheap tablets from Hong Kong go, these machines look pretty decent. They come in a variety of colors, with either capacitive (multitouch) or resistive (single touch) displays. The tablets also have SIM card slots and optional 3G modems.

5 replies on “Pierre Cardin tablet with VIA CPU, detachable keyboard”