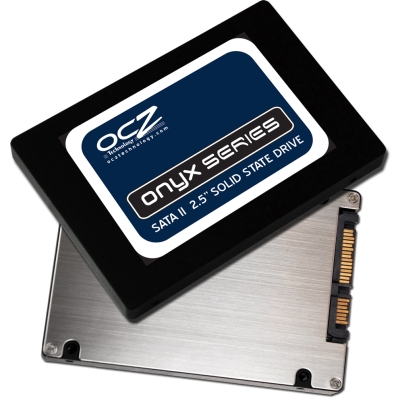 Solid State Disks or SSDs offer a number of benefits over traditional hard drives. They tend to be faster, and because they have no moving parts they’re more durable. Sure, you get a limited number of write cycles per disk, but that number is high enough that you’re not likely to kill your SSD in the next 5-10 years no matter what you do. Odds are you’ll want a larger or faster disk before your SSD dies.

But the biggest problem with SSDs today is that they tend to be expensive. At a time when you can pick up a 1TB hard disk for your desktop for under $100, it feels silly paying hundreds of dollars for a 64GB or 128GB SSD.

OC’z latest laptop SSD manages to break the $100 barrier. But there’s a catch. It only stores 32GB. That’s probably enough for some netbook users though, or for anyone looking for a fast drive to store their operating system and bootup programs while offloading other data to a larger hard drive.

The OCZ Onyx Series SSD is a 2.5 inch disk that can fit comfortably in most laptops or desktops. It can handle read speeds up to 125MB/s and write speeds up to 70MB/s.

This isn’t the only sub-$100 SSD on the market. Kingston also introduced a 30GB SSD that sells for about $80 earlier this year.

via Hot Hardware and Gizmodo