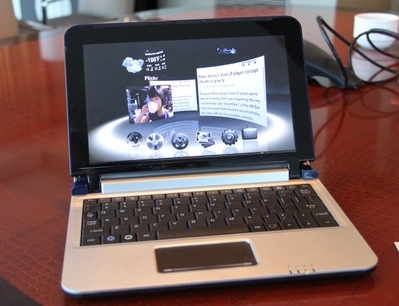 The Mobinnova Beam is an 8.9 inch smartbook that uses NVIDIA’s Tegra platform to deliver HD graphics without using much power. NVIDIA and Mobinnova have been showing off the Beam for months, but it hasn’t yet hit the streets.

Earlier this year, I heard that it would eventually be available with either Windows CE or Google Android, but up up until now we’ve only seen prototypes running Windows CE. Now Laptop Magazine’s Mark Spoonauer has spent some hands-on time with a model sporting Google Android.

Out of the box, the Android version of the Mobinnova Beam won’t be able to download applications from the Android Market. But Mobinnova does plan to load it up with some video games that will take advantage of Tegra’s 3D graphics capabilities. The device will also be able to support 1080p HD video, and CinemaNow reportedly plans to offer a video download service.

There’s still no word on the pricing or availability, but there’s a good chance we’ll eventually see the Mobinnova Beam offered at subsidized prices by mobile broadband providers including AT&T.

6 replies on “Mobinnova Beam smartbook gets a Google Android update”