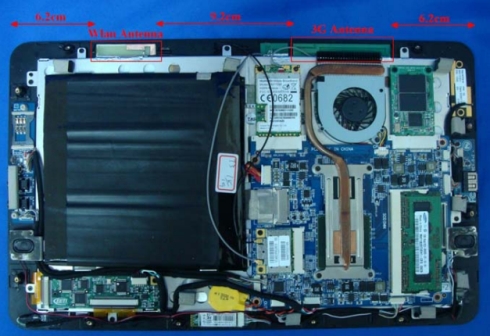 Just in case you had any doubts that the JooJoo tablet was real, the FCC is here to help. The federal agency has published a series of documents related to the upcoming tablet, which is expected to begin shipping by the end of the month. Hot on the heels of Engadgets’ new photos of the JooJoo’s flashy new user interface, we can now take a peek beneath the tablet’s hood thanks to the FCC’s penchant for ripping the lid off of wireless devices.

So here’s what we know at this point. The tablet sports an Intel Atom N270 processor and NVIDIA ION graphics. It supports 802.11b/g/n WiFi and there’s a SIM card slot for an optional 3G module.

While JooJoo plans to sell the tablet with a custom Linux-based operating system, it has an x86-based processor which means it can run Windows, OS X, or pretty much any other OS you care to cram on its relatively small solid state disk. In fact, Wireless Goodness noticed that the JooJoo tablet appears to be running Windows Vista in one of the test setup photos.

The 5 hour battery is not user removable.

The JooJoo tablet is scheduled to start shipping on March 25th.