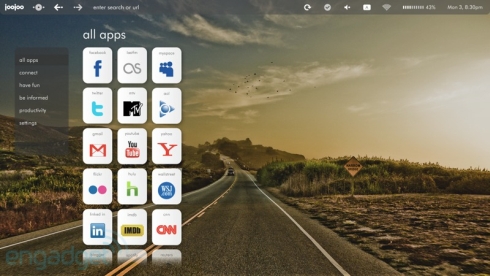 The JooJoo tablet from Fusion Garage is due out later this month. While the tablet got off to a rocky start, thanks to a high profile dispute with original partner, TechCrunch, the team at Fusion Garage has put a lot of work into making this 12 inch tablet an attractive alternative to the Apple iPad.

Sure, the JooJoo won’t run iPhone or iPad apps or any of the thousands of applications designed or Windows or Android tablets. But the point of the JooJoo was always to be primarily a tablet designed for surfing the web.

Engadget has received a series of shots of the recently redesigned user interface, which shows that you can also treat many web applications as if they were desktop apps. For instance, Facebook, Twitter, YouTube, and Hulu are all treaed as “apps.”

Fusion Garage has also changed the finger-friendly navigation menus to make the JooJoo tablet easier to use.

The biggest problem the JooJoo faces is its relatively high price tag, though. At $499, this tablet will go head to head with the cheapest version of Apple’s iPad — which includes a web browser, plus thousands of third party applications. How much do you really need an extra few inches of screen real estate?