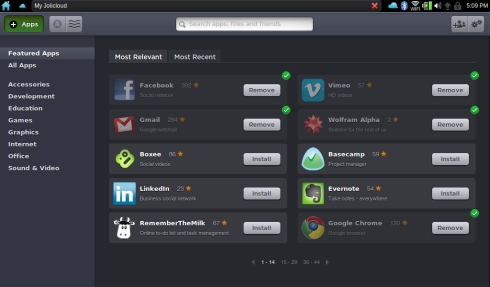 The Jolicloud team has announced that the final release of Jolicloud “Robby” is due out before the end of the month. The update will incorporate a number of features we’ve already told you about, including support for Intel Atom Pine Trail and VIA C7-M processors. But there are two major new features:

The desktop mode makes a lot of sense, since there are plenty of nettops out there with the same guts as netbooks (Intel Atom processors, Windows XP or 7, integrated graphics or NVIDIA ION). But the move from Prism to Chrome for the web apps is a pretty big deal.

According to the folks at Jolicloud, this will lead to a faster browsing experience, more efficient memory use, and support for Chrome extensions in all web apps. It will also help performance on ARM-based netbooks and tablets.

The default web browser for Jolicloud is still Firefox. But the Chrome rendering engine will handle all the web apps you’ve “installed” on your system.

The new release will also be the first that the Jolicloud team says is compatible with 100% of the netbooks on the market with Intel processors. That includes systems with older Intel Celeron CPUs or the latest Atom Pine Trail chips as well as computers with NVIDIA ION graphics or Broadcom Crystal HD video accelerators.