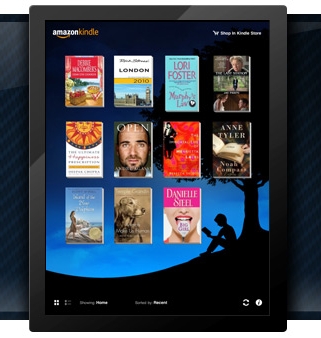 While the Apple iPad has been panned by some as nothing more than an oversized iPod touch, the truth is that it has a faster processor and one killer feature: A larger display. At 1.6 pounds, it’s still thinner and lighter than most other tablets on the market, and with access to over 100,000 iPod touch apps plus new software that’s being developed specifically for the Kindle, the iPad could turn out to be a very versatile platform.

Or it could just be a new way to watch movies and read eBooks. Apple plans to launch an iBooks service that will let readers find, purchase, download, and read books on the iPad. Don’t like the selection or don’t feel like signing up for yet another online eBook store? Amazon and Barnes & Noble are both working on iPad apps. Both companies already offer iPhone/iPod touch applications and the new iPad versions will be optimized for the larger display.

According to the New York Times, the Amazon Kindle app for the iPad will have a book-like interface, letting readers “slowly turn pages with their fingers.” Thanks to the additional screen real estate, Amazon is also working on a new library view that makes it easy to see your collection of books.

Neither Amazon nor Barnes & Noble have pre-release iPads to work with, which means there’s a good chance that Apple’s iBooks software will have a bit more polish out of the gate. In fact, Amazon and Barnes & Noble say their eBook readers won’t be available on day one — they plan to wait until a little while after the iPad is released before making their software available so they have more time to test and optimize their eBook readers.

So what do you think? Are you interested in picking up an iPad to read eBooks? Would you rather spend a smaller sum of money on a device like the Kindle or Nook that just reads eBooks? Or do you think that $499 and up is a fair price for an eBook reader that also functions as a web browser, video player, gaming machine, etc?

One other interesting thing to note — Amazon isn’t just developing the new Kindle App for the iPad. The company says it will be available for “tablet computers including the iPad,” which seems to indicate that this will be a cross-platform app. Does that mean it will run on Android tablet? Windows 7 tablets? I don’t know. But it shows that Amazon is far more interested in selling digital books than digital book readers. Unlike the Kindle hardware, Amazon’s Kindle software is available for free — but most of the books cost money.

18 replies on “Is the iPad an oversized iPod touch — or a souped up eBook reader?”