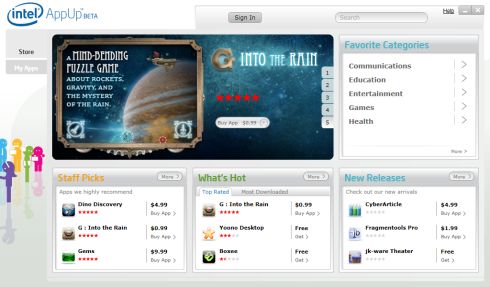 Intel’s AppUp Center offers netbook users a single place to find and download applications optimized for netbooks with small displays and Intel Atom processors. You know, kind of like the iTunes App Store, but for netbooks instead of iPhones.

Up until today, the AppUp Center was only available for Windows, which struck me as kind of silly, since I’ve never really heard people complain that it was hard to find Windows apps that can run on netbooks. Most of them will, although some apps with minimum processor or screen resolution requirements struggle a bit.

But Linux is another story — especially a relatively new and unusual Linux environment like Moblin. A Moblin app store makes a lot of sense. And today, there is one. Intel has launched the AppUp Center Beta for netbooks running Moblin 2.1. In order to download the Moblin apps, you’ll need to be in the US and Canada… for now. But Intel has also announced that the AppUp Center Beta for Windows and Moblin Linux will hit 27 European countries on March 31st.

The AppUp Center has games, entertainment, social media, apps, and other utilities optimized for small screen netbooks. The app store features a combination of free and paid software.