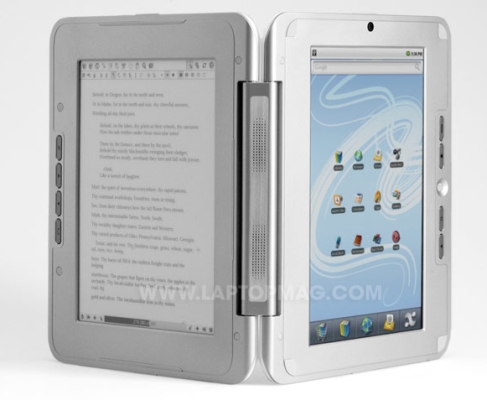 The Entourage Edge is a strange little machine. It’s about the size and shape of a netbook. But instead of a screen and keyboard, it has two screens: 1 9.7 inch e_ink display and a second 10.1 inch color LCD. Both screens are touch sensitive, and the Edge runs Google Android, which means it can run a number of third party apps.

But first and foremost it’s an eBook reader — even if, at 3 pounds, it happens to weigh about 5 times more than your typical dedicated eBook reader.

Laptop Magazine’s KT Bradford has published the first detailed review of the Entourage Edge. While she was impressed at the ambitious effort to create a multipurpose device that makes the Amazon Kindle look boring, she found it a bit bulky. She was also disappointed with the available software.

That said, unlike a dedicated eBook reader, the Edge can play music and video. And it can run some third party apps, including the Dolphin Web browser, an RSS reader, and Facebook and Twitter apps.

I was also a tiny bit surprised to see that the hinge lets you fold either screen over the other for use in tablet mode. So you can treat the Edge as if it were simply a black and white eBook reader or an Android tablet. I hadn’t seen any photos of the edge in this configuration before. But again, 3 pounds is pretty heavy for a tablet.