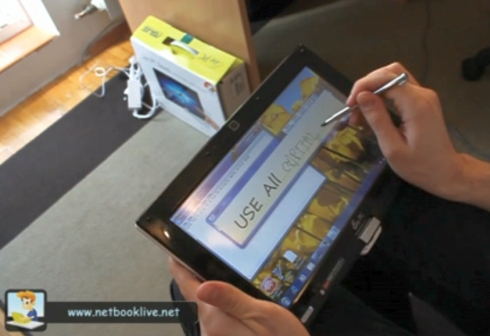 The Asus Eee PC T101MT hasn’t started shipping yet, but we’ve been seeing pre-release versions for the last few months. And the verdict has generally been that the computer feels a little sluggish and the touchscreen was a bit unresponsive. But it looks like the final production version of the netbook is much better.

Andrei Mihai at Netbook Live managed to snag some time with an Asus Eee PC T101MT convertible tablet style netbook — and his demo unit is basically the same as the ones that Asus will begin shipping son.

He says the production model has a much better touchscreen. You can use either a stylus or a fingertip to interact with the multitouch display. Handwriting recognition seems to work reasonably well, but you’ll notice that Andrei doesn’t place his palm on the display as he writes, so don’t expect a true “inking” experience.

The user interface seems a bit zippier and more responsive on the T101MT than on the 9 inch, Eee PC T91MT. That makes sense, since aside from having a larger, 10 inch display, the T101MT also has a faster, 1.66GHz Intel Atom Pine Trail CPU, while the T91MT is stuck with a 1.33GHz Intel Atom Z520 processor.

You can check out Andrei’s video overview below. It’s worth pointing out that the YouTube video he tested in the review was a stop-motion film, so the video playback wasn’t actually that choppy. But while standard definition Flash video should be fine, I wouldn’t expect HD Flash video to play smoothly on this netbook.