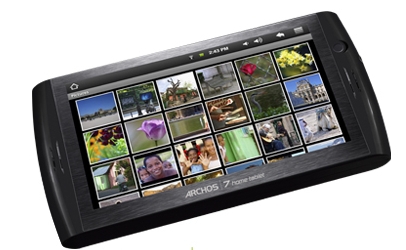 The Archos 7 Internet Tablet features a 7 inch touchscreen display and runs Google’s Android operating system. Like the Archos 5, the new model will come with some custom Archos software for playing audio and video files. While I was underwhelmed with the build quality and stability of the Archos 5 tablet I recently reviewed, the video software is almost worth the asking price for the tablet, since Google hasn’t seen fit to launch a really good video player for Android.

First announced at CeBIT earlier this month, it looks like the Archos 7 could ship as soon as next week. Chippy at CarryPad found a German retailer that’s taking orders for the 7 inch tablet with an estimated ship date of one week.

While many vendors are pushing Google Android-powered tablets as low cost alternatives to Apple’s iPad, it’s worth pointing out that most of these devices ship without access to the Android Market. That means while there will be well over 100,000 apps available for the iPad on day one, you’re pretty much stuck with the software that ships with an Android tablet like the Archos 7 or at best a few hundred apps that are available in third party app stores.

Some users have figured out how to enable access to the Android Market on the Archos 5 and other tablets. But as Wired points out, Google doesn’t officially support Android on tablets, so it’s likely that tablet users will have to continue hacking their way to into the Market. It’s also possible that this is largely because Google will start pushing its upcoming, browser-based Chrome Operating System for tablets and netbooks when it’s officially released later this year.