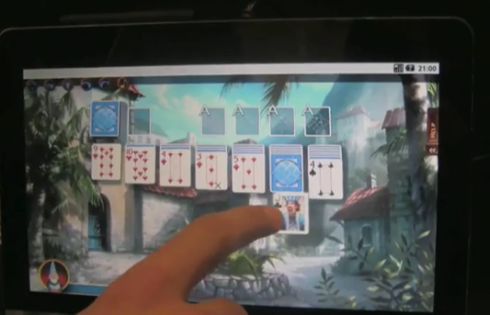 NVIDIA’s Tegra platform combines a low power ARM-based chip with NVIDIA graphics to enable HD video playback and 3D acceleration on low power tablets, smartbooks, portable media players, and other devices. I got a chance to check a few demo units out at CES in January, and they really do seem to be able to handle HD video. But it looks like the the folks at NVIDIA have been busy cooking up some software demos to show off the 3D gaming capabilities.

Netbook News caught up with NVIDIA at GDC this week. And while the games aren’t the most thrilling I’ve ever seen (Solitaire, really?), they’re good enough to give you an idea of how the Tegra chip handles 3D graphics effects. The answer? Pretty well.

I don’t think you’ll be playing Crysis on a Tegra powered system anytime soon. But the next-gen Tegra platform looks like it should at least be able to hold its own against the chips Apple is using in the iPad and iPhone/iPod touch.