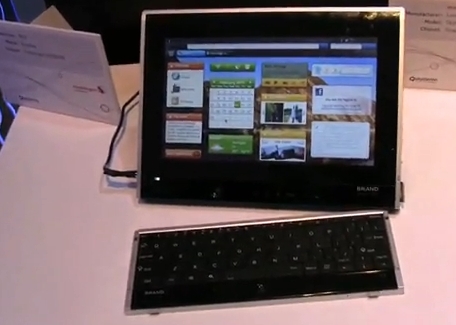 Qualcomm’s Snapdragon chipset is showing up in a growing number of smartphones including the Google Nexus One and HTC Desire. But this 1GHz ARM-based CPU with integrated wireless and HD video capabilities isn’t just for phones. It’s also capable of powering tablet and smartbook-style devices. And Sascha from Netbook News.de checked out a few of the demo units on display at the Qualcomm booth at Mobile World Congress this week.

The first was a demo unit that Qualcomm has been showing off for a while, and the second was the Lenovo Skylight, which I got a chance to tinker with at CES in January.

The third device was a bit more intriguing. It’s  a concept device that Qualcomm refers to as a “Snaptop.” There was a demo unit at CES, but it was non-functional. As you can see in Sascha’s video below, the Snaptop is now a fully functioning device running Google Android.

Basically the Snaptop prototype is a tablet with a kick stand that lets you put it down on a table and use in sort of laptop/desktop mode with a detachable keyboard complete with an integrated trackball.

SlashGear reports that the Snaptop is running a modified version of Android 1.6 and it was built by BYD.  There don’t appear to be any plans to bring this concept to market anytime soon. But it’s an interesting take on the smartbook/tablet idea. And after having spent a few weeks playing with a Snapdragon-powered Google Nexus One smartphone, I’m convinced that the Snapdragon chipset is powerful enough to provide a decent experience on a Google Android tablet like this.