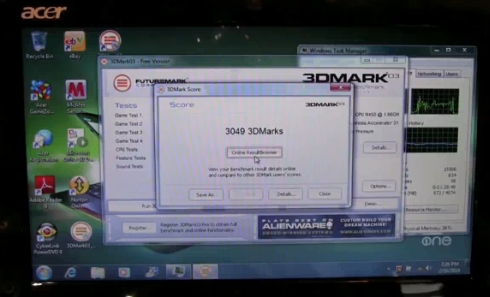 NVIDIA has yet to officially unveil its ION 2 platform. But based on a series of leaks, announcements, and the fact that the Acer Aspire One 532g with next-generation NVIDIA ION made a surprise appearance at Mobile World Congress in Spain last week, here’s what we know: ION 2 is basically a GeForce GT218 that can be paired with an Intel Atomor other CPU to offer higher performance graphics.

It doesn’t matter if the CPU has integrated graphics, like the Atom N450 with GMA 3150 graphics, because ION 2 uses NVIDIA’s Optimus technology to automatically switch between integrated and dedicated graphics depending on the tasks you’re performing. In other words, if you’re playing a game or watching a high definition video, ION 2 kicks in. If you’re surfing the web and battery life is more important than graphics performance, you’ll rely on the integrated graphics.

But how does the next-generation ION platform stack up against the first generation ION chipset available in a handful of netbooks and nettops today? And how does it fare against the GMA 3150 graphics that come standard with most netbooks?

It’s a bit early to make any definitive judgments. But the folks at Netbook News managed to grab some time with the Acer Aspire One 532g with ION 2 graphics and they ran the 3DMark03 benchmark. The verdict? It scored a respectable, if not spectacular 3049. The Samsung n150, by comparison, scored just 704 points. Higher scores are better. They tell me that they used the same test on a Samsung N510 with first-generation ION graphics and it notched a score of 3513.

Again, these scores may be due to a variety of features, and not just the ION chipset. But if you were holding out hope that ION 2 was going to be significantly faster than the first generation, that doesn’t appear to be the case. The Acer netbook actually got a lower score than the Samsung N510.

But while bleeding edge games might give the Aspire One 532g some trouble, the mini-laptop should have more than enough graphical prowess to handle 1080p HD video playback and some 3D gaming. The exciting thing about ION 2 isn’t that it’s faster than ION 1. It’s the fact that it exists at all. When Intel decided to combine the GPU and CPU into a single chip, NVIDIA could have just decided to drop its ball and go home. Instead, the company figured out a way to bring discrete, switchable graphics to low end mini-laptops.

We should have more details soon, when NVIDIA is ready to make an official announcement. And I’m going to withhold final judgment until I’ve had a chance to test an ION 2 system or two myself… or at least until I’ve seen test results for a few more systems.

You can check out the benchmarking video, courtesy of Netbook News, after the break.

Update: TG Daily got a a response from NVIDIA, and it boils down to this: NVIDIA hasn’t officially unveiled its next-gen ION platform yet and has yet to talk about its performance. Oh yeah, and Sascha benchmarked pre-release hardware, so you know, there’s that. via Netbooked