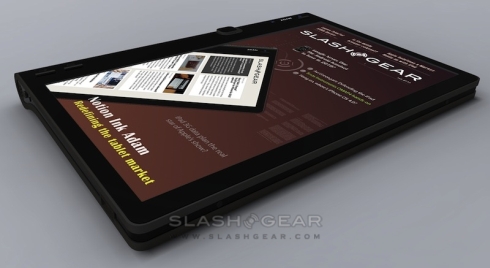 When Notion Ink showed off an early prototype of its 10 inch tablet at CES last month, the device was still in the early prototype stages. How early? The case was hand-carved out of wood instead of being made of metal or plastic. But the Adam tablet still got a lot of buzz as one of the most exciting devices on display at CES thanks to two factors. It has a Pixel Qi 3qi display which looks as good outdoors as it does indoors, and which can be flipped from full color mode to a high contrast, low power mode for reading eBooks or web pages. And the tablet uses NVIDIA’s Tegra platform which bundles high quality graphics with a low power processor.

The Notion Ink Adam still isn’t ready to ship yet. But the company sent SlashGear a series of mockup images showing what the finished product could look like. All told, it doesn’t look that different from the device I saw at CES. But the company does have a few new details to share.

First, there could be two different versions of the Adam. One would measure 12.9mm thick, while the other would be just 11.6mm. Both would be thinner than the 13.4mm iPad, although it’s likely that the thinner model would not have a Pixel Qi display.

Notion Ink claims that the Adam might be able to run for 2-3 times longer than the iPad for surfing the web or performing some other tasks. SlashGear reports that the tablet will also launch with partnerships in place with digital magazine, eBook, and comic book content available.

You can check out my hands-on video with the Notion Ink tablet prototype from CES after the break.