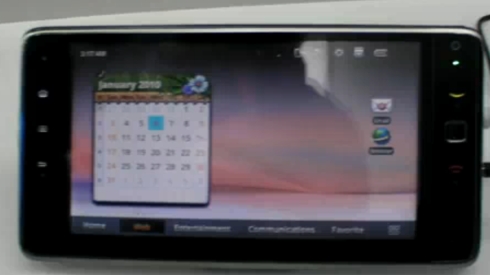 2010 is shaping up to be the year of the tablet. And by tablets, I generally mean 5 to 10 inch computers with touchscreen displays and no keyboard. Some run Windows. Others run Google’s Android operating system or custom Linux distributions. And the elephant in the room is the upcoming iPad which will run a version of the iPhone operating system.

But I don’t mean to imply that 2010 will be the year of the tablets the way 2009 was the year of the netbook. Because that would imply that this is going to be a hugely popular product category and that sales will be through the roof. We don’t know if that’s going to happen yet. The truth is, there aren’t very many tablets available for purchase at the moment. Many won’t be out until mid-year. And it’s not at all certain what people are looking for in a tablet — or if they’re even looking for devices in between a smartphone and netbook/notebook at all.

What I do mean is that dozens, if not hundreds of companies are busy pumping to new products to compete in this space. There’s a huge variety of tablet-style products making the rounds at trade shows and other events. It’s not clear how many will see the light of day, but here’s a roundup of a few new tablet-style devices I’ve spotted in the last few days:

This 7 inch touchscreen device showed up at Mobile World Congress recently, where Charbax from Armdevices.net got a chance to check it out. You can watch his video overview after the break, but the hardware looks pretty decent, and the Android operating system has been skinned and customized to give you access to several different home screens for entertainment,web, communications, and so forth.

The tablet can handle 720p HD video playback on its 800 x 480 pixel display or on an external display with an HDMI output. It has integrated 3G capabilities allowing it to function as a phone, and you can use a Bluetooth headset with it. You should also be able to access the Android Market to download and install pretty much any Android app. It’s currently running Android 1.6, but a version with Android 2.1 should be available later.

There’s also a docking station for connecting external devices through USB and audio/video ports.The SmaKit S7 should be available toward the middle of the year… somewhere.

Video after the break, as well as details on two other new tablets.

This 9 inch tablet also features WiFi and 3G capabilities. It also adds GPS and Windows 7 to the mix. It features a 1.6GHz Intel Atom N270, 2GB of RAM, and a 160GB hard drive and has a multitouch display.

ChinaGrabber is selling the X9 selling for $789.99, although I suspect it might actually be a bit cheaper if you’re in China and can pick it up without exporting it overseas first. The site also provided a short hands-on video showing the tablet

The folks at Slashgear spotted this Android-powered tablet from Mastone at Mobile World Congress last week. It’s powered by a Freescale iMX515 processor and features 3G and WiFi wireless networking. 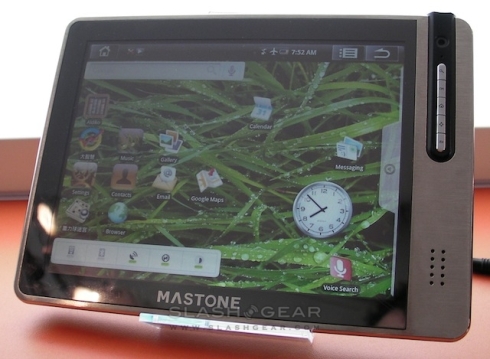 Like Huawei, Mastone has customized the Android user interface by adding a few widgets and applications. There’s no word on pricing or availability for this model.

8 replies on “More touchscreen tablets on the way”