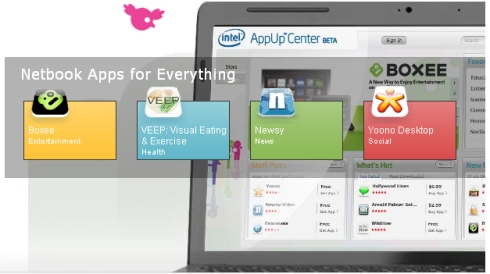 Intel is preparing to showcase a number of software applications designed to play well with Atom powered netbooks at Mobile World Congress in Spain next week. The company has been pushing its new Intel Atom Developer Program and AppUp Center app-store for netbooks. The idea is to offer programs for Windows and Linux netbooks that are optimized for devices with small screens and Atom processors.

There’s a part of me that’s pretty skeptical of the whole concept. While an App Store makes sense on a smartphone, I’ve never seen as much need for an app store for a full desktop OS like Windows XP, Windows 7, or most Linux distributions. There are already thousands, if not millions, of applications designed to run on these operating systems and it’s always bee pretty easy to find, download and install the applications you’re looking for right on your device.

That said, I’ve been playing around with an Android phone recently and I definitely can see the benefits of an app store for some devices. With my old Windows Mobile PDA I had to first find an application, then download it to a PC and then connect my PDA to the PC with a cable and synchronize it to the desktop using ActiveSync before starting the installation process. Being able to just open up the Android Market on the phone, find an application, and click install is so much easier.

And I suppose for some people, the same will be true on a netbook. But you’re not saving nearly as many steps on a netbook.

Still, for casual PC users, it might be nice to be able to fire up the AppUp Center and download some programs that they know will work on their device because they’ve been pre-screened by Intel.

Anyway, some of the first apps that Intel plans to highlight at Mobile World Congress include media center Fluoh (from Fluendo), video editor JayCut, VoIP and chat software Fring, and and internet radio player Vagalume.