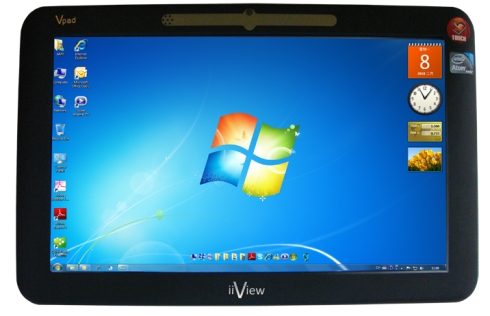 What do you get if you take the guts of a netbook and cram them into a 10 inch tablet PC without a keyboard? An ever-growing class of relatively inexpensive tablets which are rushing to fill a niche that has yet to show any real consumer demand. The latest entry is the iiView iPad, which weighs less than 2 pounds, runs Windows 7 Starte rEdition, and sports a 10.2 inch, 1024 x 600 pixel touchscreen display.

On the inside, the vPad is pretty much all netbook. It has a 1.6GHz Intel atom N270 CPU, 1GB of RAM, and 160GB hard drive and sells for $499. Sure, that makes it kind of expensive for a netbook, but the price bump isn’t surprising considering you get a touchscreen display and a lighter-than-netbook case.

For $699 you can get a souped up model with 2G of RAM, a 320Gb hard drive and integrated 3G. There are a few other $599 configurations in between. The web site claims that even the higher end models come with Windows 7 Starter, but that seems a bit fishy to me, since Microsoft doesn’t license Windows 7 Starter for devices with 320GB hard drives and 2GB of RAM.

What say you? Are you looking for a touchscreen tablet running Windows 7 Starter? Or would you rather have something with an OS designed for touchscreens such as a Google Android-powered tablet or an iPad?