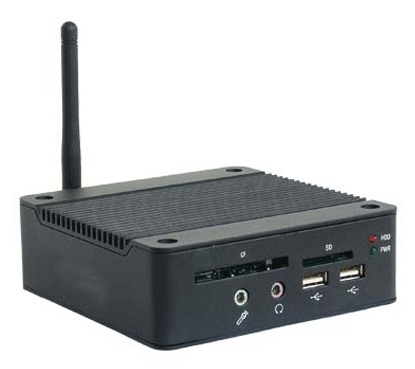 A number of companies including Asus, Acer, MSI, and Shuttle have been putting out low cost, low power nettops for the last year or so. Basically these machines are netbooks without the display. They tend to feature low power Intel Atom processors, occasionally bundled with high performance NVIDIA ION graphics. And they typically sell for around $400 or less. Their main selling points are that they won’t take up much space on your desk, and they won’t add much to your monthly electric bill.

As a general rule, the nettops from Acer, Asus, and MSI look sort of like the Nintendo Wii both in terms of size and shape. But there’s another class of device that’s even tinier, including the Fit-PC, which measures just 4.5″ x 4″ x 1.05″. Now it looks like you can add the Habey BIS-6620 to this group.

There’s room for a 1.8 inch hard drive, a stick of DDR2 RAM, and optional WiFi. It’s available with WIndows XP, Vista, 7, or Linux. It has 4 USB ports, mic and headphone jacks, and an Ethernet port as well as CF and SD card slots. The computer uses less than 10 watts of power and features a VESA mount kit for attaching it to the back of your display.