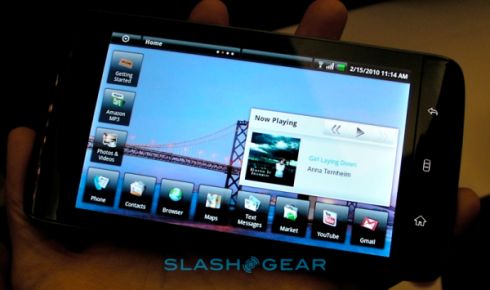 The Dell Mini 5 tablet looks like an oversized smartphone, and kind of acts like one too. It has a 1GHz Qualcomm Snapdragon processor (which is the same CPU powering the Google Nexus One phone), and runs the Google Android operating system. But it’s 4.8 inch display is larger than any screen you’ll find on a cellphone anytime soon, making the Mini 5 much more attractive for surfing the web, watching video, or playing games. You can also make phone calls and surf the web over 3G or WiFi.

Final details on pricing, regional availability, wireless broadband partners, and a launch date aren’t available yet. But Dell is showing off the Mini 5 tablet at Mobile World Congress in Spain this week, and letting a few details drop. Right now, for instance, the demo unit is running Android 1.6, but it’s likely that by the time it’s available to the public the tablet will sport a newer version of the OS, possibly 2.0, 2.1, or something even newer. Adobe Flash support is also on its way.

The user interface seems very snappy and the Mini 5 can run all Android Market applications as well as some custom Dell software. As far as hardware, you’ve got a capacitive multitouch display, haptic feedback, and a 5MP webcam with

The folks at SlashGear got to spend some hands-on time with the tablet, and you can check out their video after the break.