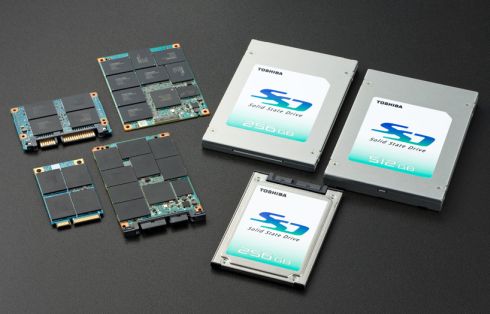 Toshiba has bumped up its line of NAND flash based SSDs (PDF link) to include 128GB solid state disks that are designed for netbooks and low profile notebooks. The 128GB drive comes in mSATA and half-slim SSD versions. It can handle sequential write speeds up to 70MB/s and sequential read speeds up to 180MB/s.

Toshiba is also launching a higher end line of HG high performance SSDs. These will be have read speeds up to 250MB/s and write speeds up to 180MB/s. These drives will come in 64GB, 128GB, 256GB, and 512GB flavors. While there’s no word on pricing yet, it’s fair to say these are going to be somewhat more expensive than the 128GB module mentioned above and probably won’t end up in a low priced netbook anytime soon.