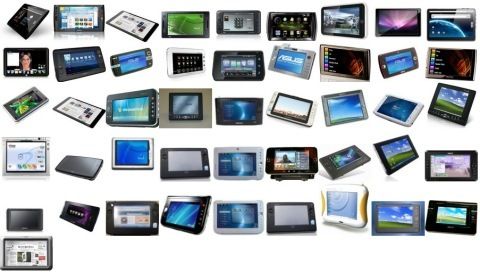 Apple CEO Steve Jobs is likely preparing to officially pull the veil off of the worst-and-best kept secret in the tech industry tomorrow with the introduction of some sort of Apple Tablet. You know, unless the company is even better at keeping secrets than we thought and he’s actually unveiling a new space tourism initiative that provides you with one free ticket to a new moon base with the purchase of every iPhone.

Anyway, it’s likely that the Apple Tablet won’t be quite like any device on the market today. But it’s hardly going to be the first tablet-style device. We’ve been using PDAs, slates, touchscreen phones, and notebooks with convertible touchscreen displays for years. Microsoft has tried to spark interest in the space at least a few times, first by pushing notebooks with full keyboards that can be converted into laptops, and most recently with the Origami/UMPC concept for 10 inch and smaller touchscreen tablets, usually sans keyboard.

And while tablets running Windows have never become part of the zeitgeist the way that, say, the iPhone has, there are plenty of tablets already on the market. And there are plenty more on the way, including a number that will run Google’s Android operating system rather than Windows.

There have been plenty of pundits claiming that the Windows paradigm was never right for touchscreen tablets. The concept of folders, a start menu, and so forth work better with a mouse, while a touchscreen works better with a different sort of interface — something Apple figured out when the company designed the UI for the iPhone. But you know what? There are still an awful lot of tablets running Windows, as well as a fair number of happy tablet users.

For an overview, check out UMPC Portal, where our buddy Chippy highlights the 46 tablet PCs in his product database.

Apple may or may not be on the verge of revolutionizing the tablet space. But the company is hardly creating it.

7 replies on “The Apple Tablet will be in good company”