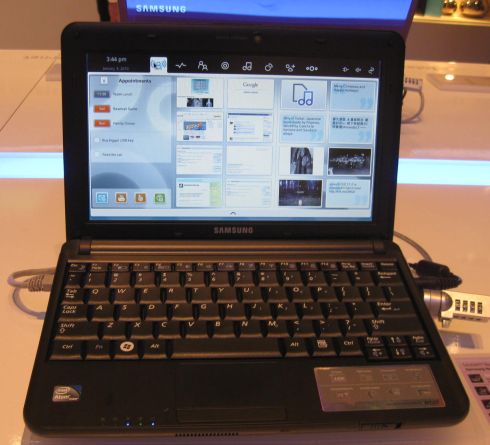 Samsung is showing a modified N130 netbook this week running Moblin Linux. There are no plans to bring a Samsung-branded Linux netbook to the US market this year, but the Korean company could launch it somewhere else… or not at all.

Of course, as with any Linux distribution, the challenge is that most people that are used to Windows or OS X will find that a Moblin netbook won’t run all of the apps they’re used to. If all you want is a web browser and an almost phone-like interface for checking your email, updated Twitter and Facebook, watching videos, and listening to music, the Samsung N127 would be an awesome device. If you want to run iTunes, Microsoft Office, or Adobe Photoshop, not so much.

Update: You can also check out my hands-on video to see how Moblin really flies on this netbook.