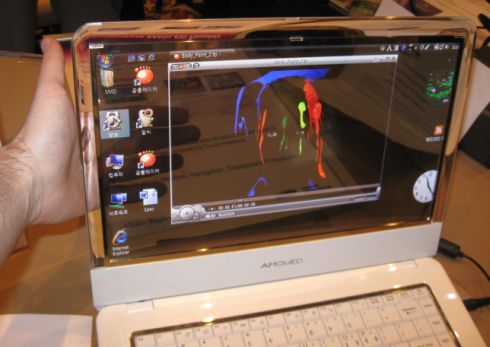 This could be the coolest thing I’ve seen since I got to Vegas on Tuesday. Samsung is showing off a notebook prototype with a 14 inch transparent OLED display. When the screen is off, it’s up to 40% transparent. And when it’s on, you can clearly see the display, but you can also see right through it.

The OLED display really isn’t all that useful for notebooks, but it’s still pretty impressive looking. Where it could really come in handy is “head-up” displays for vehicles. Samsung says the tech could also be used for MP3 players, eye-catching advertisements and displays, and notebooks like this prototype.

I think it’s safe to say that this tech isn’t going to be coming to low-cost netbooks anytime soon. But it was just too cool not to share.

You really have to see it in action to get the full effect, so check out the short video after the break.