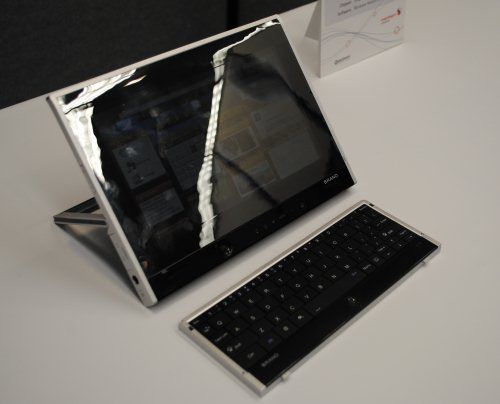 Qualcomm’s Snapdragon platform had a pretty major presence at CES. It popped up in Lenovo’s upcoming Skylight smartbook and a prototype smartbook from HP. The Lenovo LePhone will also use the Snapdragon chipset. But Snapdragon isn’t just for smartbooks and smartphones. The folks at Laptop Magazine spotted a tablet concept that’s also powered by Qualcomm’s chip.

What’s interesting about this tablet is that it’s what Qualcomm is calling a “Snaptop.” There’s a kickstand on the back of the computer that you can bring down to prop the PC up on a table. And attached to the kickstand is a removable keyboad that  connects to the tablet via Bluetooth.

The Snaptop won’t fit on your lap, unless you’ve got a very unusually shaped lap. But as a tablet, you can hold for surfing the web or watching movies in bed, on the couch, or on a bus. And you can also prop it up on a table and pull out the keyboard when you want to enter a bit more text than would be comfortably using the on-screen keyboard.

Because the prototype uses Qualcomm’s ARM-based processor, it offers HD video acceleration and low power consumption. Unfortunately, since the prototype is running Google Android, Flash doesn’t work, because there’s no support for Adobe Flash on Android yet.

The Qualcomm Snaptop is in the concept phase for now and may or may not ever see the light of day. But you can see more photos plus a hands-on video at Laptop Magazine.