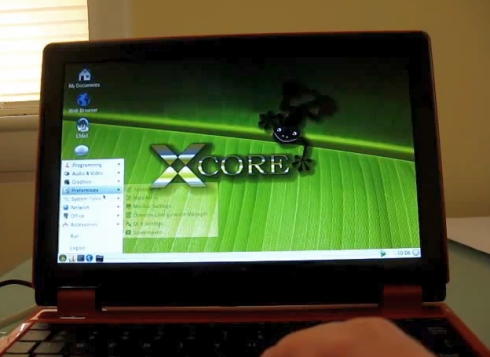 The NorhTec Gecko Edubook is unlike pretty much any other netbook on the market right now. Sure, it has an 8.9 inch. 1024 x 600 pixel display and a small keyboard. But it has an unusual 1GHz XCore86 CPU which can be popped out and easily replaced. The entire OS runs from an internal SD card, which is also removable. And while Lithium Polymer battery packs are available, the system is also designed to run on normal NiMH rechargeable AA batteries.

All of this means that this low cost laptop is modular, easy to upgrade and easy to fix. If your batteries run down, you can just go out and buy some new rechargeable AAs to replace them instead of sending away for an expensive battery pack from the manufacturer. NorhTec advises against using alkaline batteries, since the power cable is designed to charge the batteries while plugged in.

Although a number of Linux and open source hackers have expressed an interest in the Edubook, it’s aimed squarely at education markets in developing nations. A single Edubook costs just under $200. If you order $10,000 units, the price drops to $145. If you happen to be in a position where you can order 100,000 you can get the price down to under $100.  although it’s also proving popular with Linux and open source hackers.

Now, to be fair, the NorhTec Gecko Edubooks is not designed as a laptop replacement for users in the developed world. As such, it’s probably not surprising that it’s slow to boot, applications are slow to load, and multitasking performance is subpar. The question is: are these things OK for a child in Africa? If it means getting access to a computer that might not otherwise be available, perhaps. And because you’ll be able to pop out the system-on-a-chip CPU and replace it with an updated model when they’re available, we could see faster versions in the future.

The demo system that NorhTec sent me shipped with WattOS, a light weight Linux distribution based on Ubuntu. I had a chance to experiment with WattOS on the Edubook for a little while, and then I decided to install Windows XP using the driver disc that NorhTec provided. You can check out video overviews of each OS after the break.

WattOS takes a while to load, and once it’s up and running, it takes a surprisingly long time to move from the login screen to a usable desktop.

While the version of WattOS that ships with the Edubook does come with a number of media players, video playback is pretty much a non-starter. I had a difficult time getting local video to play, let alone Flash video.

Simple web pages such as Google.com or NYTimes.com loaded reasonably quickly in Firefox. But Javascript heavy applications such as Gmail are much slower to load.

I installed Windows XP using a USB DVD drive, and while I wasn’t keeping an eye on the clock, the install process probably took somewhere around 4 hours. That’s not a good sign. The notebook does run Windows XP, and I was able to install the drivers and several other applications including the Google Chrome web browser and VLC media player.

But VLC crashed when I tried actually playing videos. I was able to get a few videos to load using Windows Media Player, but they tended to be choppy at best, and play at half speed at worst. It’s possible that some video formats, bit rates, and resolutions may play better than others, but the Edubook is sluggish enough that I don’t feel like spending more time experimenting. And again, it’s not really designed for multimedia playback.

Using the Google Chrome web browser, I was able to visit Google, the New York Times, and Liliputing. I was able to load Gmail, but performing simple tasks like reading or composing email messages was excruciatingly slow.

I also had an easier time getting the WiFi working under Windows, using the Realtek driver provided by NorhTec. For WattOS, NorhTec included a set of command line instructions that were quite honestly, a bit beyond me. I have some experience using Ubuntu and other Linux distributions, but I’ve been spoiled by graphical user interfaces over the last decade or so.

As far as the computer’s other hardware, the keyboard is quite small, but it should be large enough for a children’s hands. The screen is about part for the course, offering decent but not spectacular brightness and color.

Update: I go ta chance to try Puppy Linux on the Edubook, and man does it fly! Video playback is still troublesome, but the computer is much more responsive and web browsing performance is quite acceptable with Puppy.

For nostalgia’s sake, here’s the unboxing video and a second short video I shot the same day taking a look at the netbook’s hardware: